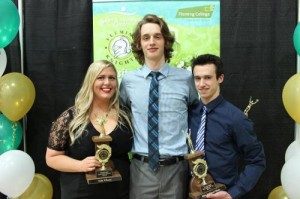 This award is given to the athletes who demonstrate excellence both in the classroom and in athletics at Fleming College. The individuals have shown great leadership, commitment, dedication and are a positive role model both on and off the court/field.

This is for a first-year athlete that has achieved both academically and athletically while participating in varsity sports.

This award is given to those individuals that have shown great leadership, commitment, dedication, is a positive role model, and has achieved both academically and athletically.

This award is given to the individual who best exhibits qualities of heart, spirit, and dedication on the rugby pitch.