Daniel Gordon tearing up the hardwood in OCAA basketball action 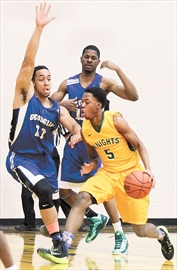 At times, Daniel Gordon finds himself swinging from opposite ends of the pendulum.

Focussed, determined and with a sound attitude, he thrives on the game of basketball with one dominant performance after another – including 10 games, at the Ontario college level, having scored 30 or more points.

In the classroom, Gordon adjusted his grades for the better, remains attentive to a career and will be graduating this year with a diploma in business.

All that may have taken some adjusting, determination and a huge commitment by the young man who was born in the Jane and Finch area of North York, grew up in Ajax and now resides in the Markham and Lawrence area of Scarborough.

When asked about his formula for success, the 20-year old points to his parents for setting him on track and in the right direction.

With his father Clive stressing the need for a sound education, his mother Carol made sure signed him up for basketball programs as a younger to keep him focussed and away from any possible connection to mischievous activities.

“I am very lucky – my parents are the best,” said Gordon, who is excelling at Fleming College in Peterborough and also on the hardwood as the Knights marquee player.

“They moved me out of a tough neighbourhood as a kid, sent me to basketball camps and all that has helped me change my life for the better.”

A 6-foot-2 point and shooting guard, it took the Ontario Colleges Athletic Association some time before bestowing “Athlete of the Week” honours his way.

All Gordon has done, is score big points – game after game.

In his first game of the year, a 104-92 loss to Scarborough’s Centennial College, Gordon dropped a game-high 31 points. Then the personal best rose to 39 in a game against La Cite of Ottawa. Up again, this time to 43 against North York’s Seneca College.

But Gordon, a former Ajax High School Player of the Year, was just warming up – and is now the No. 1 scorer in the province. Remarkable, indeed considered his team has only one win in 15 games and that has the youngster frustrated.

That victory came as Gordon notched 33 points in Fleming’s 94-91 win over Loyalist College of Belleville to end a 13-game winless streak in January.

Gordon also scored a personal-best 50 points, the most by a college player in Ontario in almost four years and it came in a 17-point loss to Durham College of Oshawa. From three-point range, he was 7-of-10, went 5-of-6 from the free throw line and clicked on 19-of-32 shooting.

Despite the heroics of Gordon, Fleming needs to win its remaining five games in February, and still hope for some magic to make the playoffs – something highly unlikely considering a 1-14 record now doesn’t look promising.

“It’s frustrating, I give it my best each time and I can’t give up on my team,” said Gordon, who is a leader in other ways getting in the mix of things to break up a heated conflict with players in a recent 22-point loss to Centennial.

“We practice hard, we have lots of younger players, things have to improve and I’d like to win a game before I graduate.”

The youngest of four siblings, Gordon remembers getting involved in basketball as a youngster and also played for Scarborough Blues in the Ontario Basketball Association.

“I wish I was just a bit taller because it would help me,” said Gordon, who wants to continue his basketball playing in Canada or Europe and hasn’t ruled out a shot at the pro game. “My mother told me to always follow your heart, do the best. I love (basketball) and this game has helped me grow, generate lots of friends. If it wasn’t for it, I don’t think I’d be enjoying so much success.”