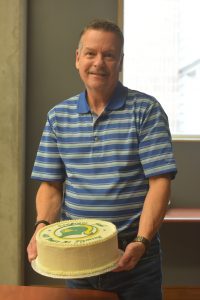 Over the last four decades, Fred Batley has seen a lot of change at Fleming College.

Fred, Athletics Coordinator, recently celebrated 40 years of service at Fleming. Starting out at McDonnell Street as a program assistant in the Recreation Department in 1977, Fred recalls there were only about 800-1,000 students at the time.

Today, Sutherland Campus has 4,800 students and is highly ranked in the college system for the quality of its athletics programs and facilities.

And along with Fleming’s evolution, has come Fred’s personal and professional growth over the years. He moved on from his initial position to become intramural coordinator in 1980 and since then has held various roles.

“I was fortunate to work in many different areas throughout my time: teaching, different roles in the Athletic Department, and coaching Fleming varsity teams. I was able to challenge myself and grow over the 40 years.”

While the College has grown immensely since its early days, Fred says that some things remain the same.

“One thing that has not changed is the student-centered focus in which the student is a name and not a number. Fleming remains a caring institution, which is always prevalent… to this day.”

In his current role, Fred says he truly enjoys working with the students and student athletes on a daily basis. And reflecting on his many years of service, Fred says he is most proud of Fleming’s progression to become ranked #7 in the OCAA for overall medals – impressive for a small college. Other career highlights include the construction of the Peterborough Sport and Wellness Centre and the Fleming Sport Complex as well as his time served as a two-time OCAA and CCAA president.

“I feel this has helped Fleming College become well known and respected in Ontario and Canada,” he says.

Born and raised in Peterborough, Fred says he was always involved in sports growing up and initially wanted to become a physical education teacher. He came to Fleming after attending Western and Trent universities.

He has been married to his wife Judy for 35 years and has two daughters – Sarah, a chiropractor in Toronto, and Stacey, a teacher in Red Deer, AB – and a two-year-old granddaughter, Sophie.

And while he is still passionate about athletics, he spends a lot of his time away from work volunteering with the St. James Players.

“When I was younger I played a lot of sports. But most of my time now is spent with the St. James Players, over the past 25 years. It is a local community theater group, which puts on two musicals a year for youth and adults. And I am currently the Chair of the Board for the St James Players.”

(In fact, Fred was in the recent St. James Players staging of Mary Poppins at Showplace Peterborough.)

As he moves into his 41st year at Fleming, Fred is enthusiastic and emphatic about his time at the College.

“I have really enjoyed working at Fleming with the students, staff and faculty – because it is a great place to work!” 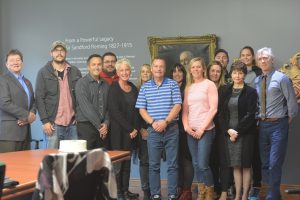 Fred celebrated his 40-year anniversary last month with his Fleming friends and colleagues in Athletics and Student Services.

Story written by: The Fleming Zone