As we work towards a safe return to sports, Fleming Athletics is pleased to announce the tentative varsity tryout schedule for the Fall 2021 season. All who wish to tryout must be full-time students for the Fall semester and email sportsinfo@flemingcollege.ca expressing their intent.

As per Fleming’s updated vaccination policy, everyone, including student-athletes, will be required to have received the first dose of a COVID-19 vaccine by September 7, 2021, and second dose by October 20, 2021, in order to access and participate in the college’s varsity sports program. Additional safe sport procedures and communications will be shared in the coming days and weeks as we gradually and safely resume sports at Fleming.

Please direct your questions and interest in tryouts to: sportsinfo@flemingcollege.ca.

We look forward to seeing you on the field! 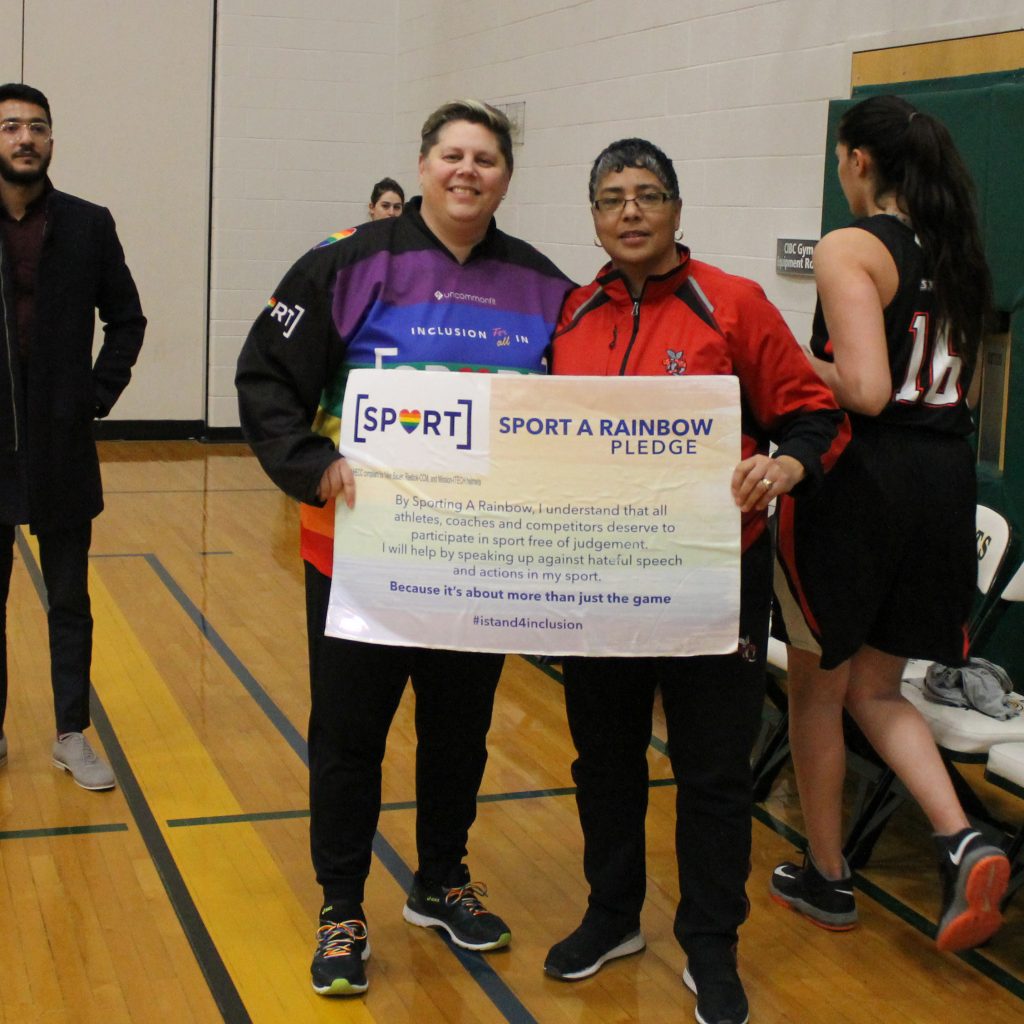 Congratulations Rose Powers for earning a spot in the Peterborough and District Sports Hall of Fame’s 2020 induction class as both an athlete and a builder!

Many of you know Rose from our Knights Coaches training last August where Rose provided an overview of Sport a Rainbow, which she founded, and worked with us through the Sport a Rainbow pledge in support of inclusion in sport.  Last semester Rose joined the Knights team as an Assistant Coach for our Women’s Extramural Hockey program and also kicked off our inaugural diversity and inclusion night with our women’s and men’s basketball programs on January 30.

As you can see in the article, Rose’s impact on the local sports and specifically the female hockey community is significant and spans across several decades. 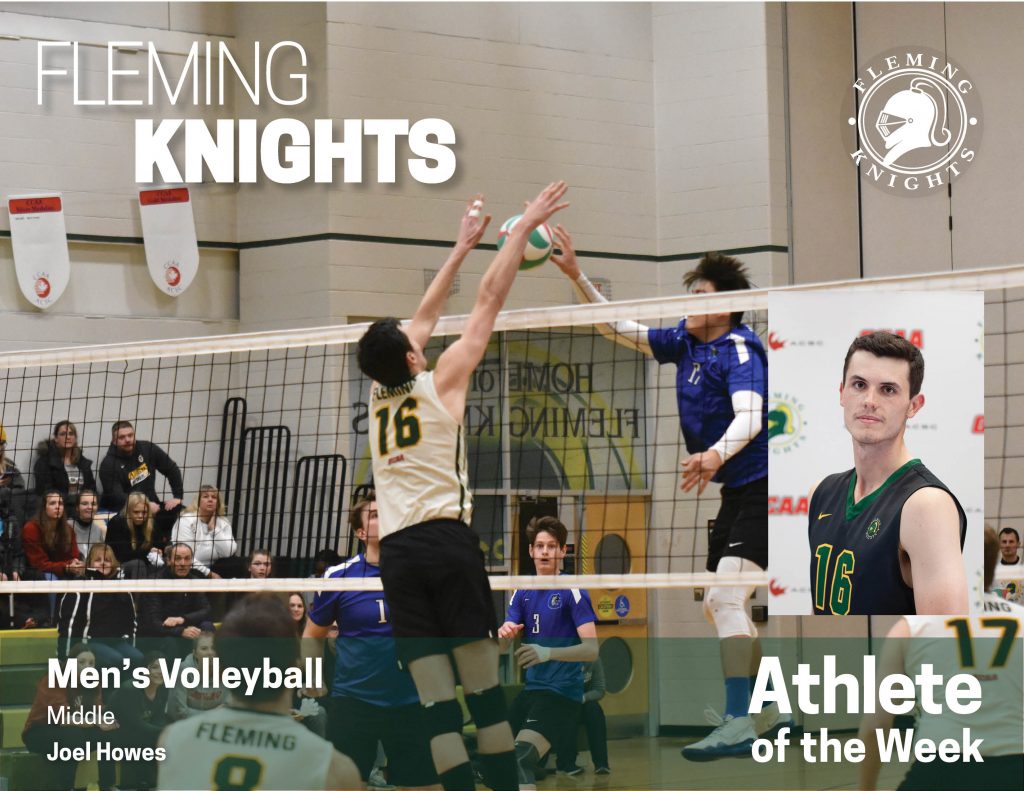 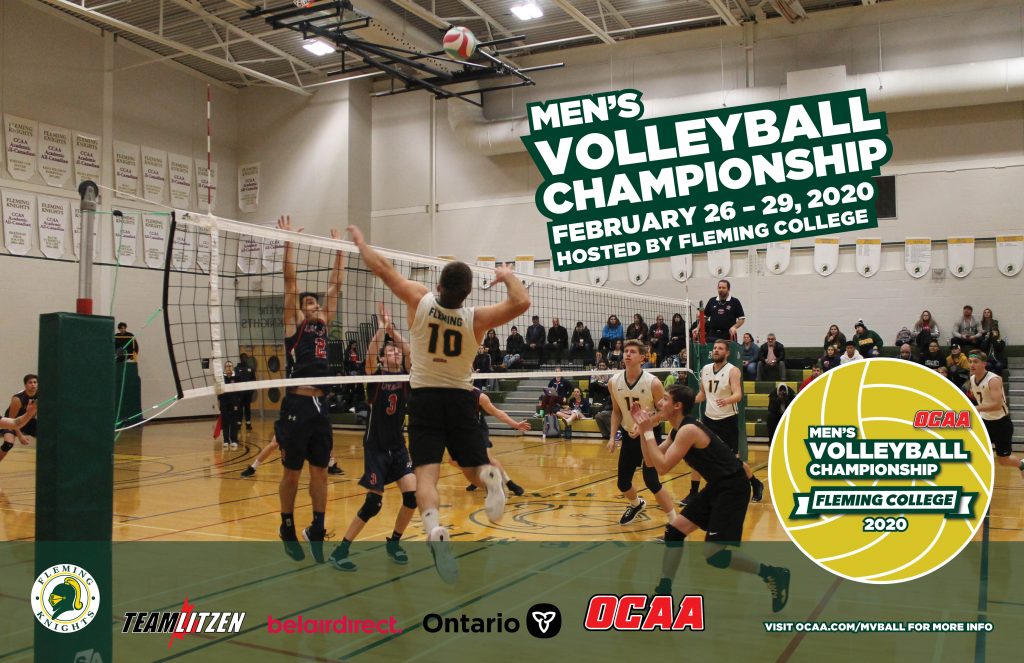 The event brings the best of the province’s varsity athletes together for the annual championship.

As host, the Fleming Knights men’s volleyball team received an automatic entry into the OCAA provincial championships which showcases the top eight teams from across Ontario for three days of top-level competition. The championship games will begin with the quarter-finals taking place on February 27, followed by the semi-finals on February 28. The qualifying teams will compete in the gold, silver, and bronze medal games on February 29. The awards banquet will take place on February 26 for participating athletes at the Holiday Inn Waterfront Hotel in downtown Peterborough.

“Fleming College and our Athletics and Recreation department is honored to be hosting the 2020 OCAA Men’s Volleyball Championship,” said Greg Jefford, Manager of Student Experience and Athletics. “We are excited to welcome the top collegiate volleyball players from across the province to the college and City of Peterborough to participate in this year’s event at the Peterborough Sport & Wellness Centre.” 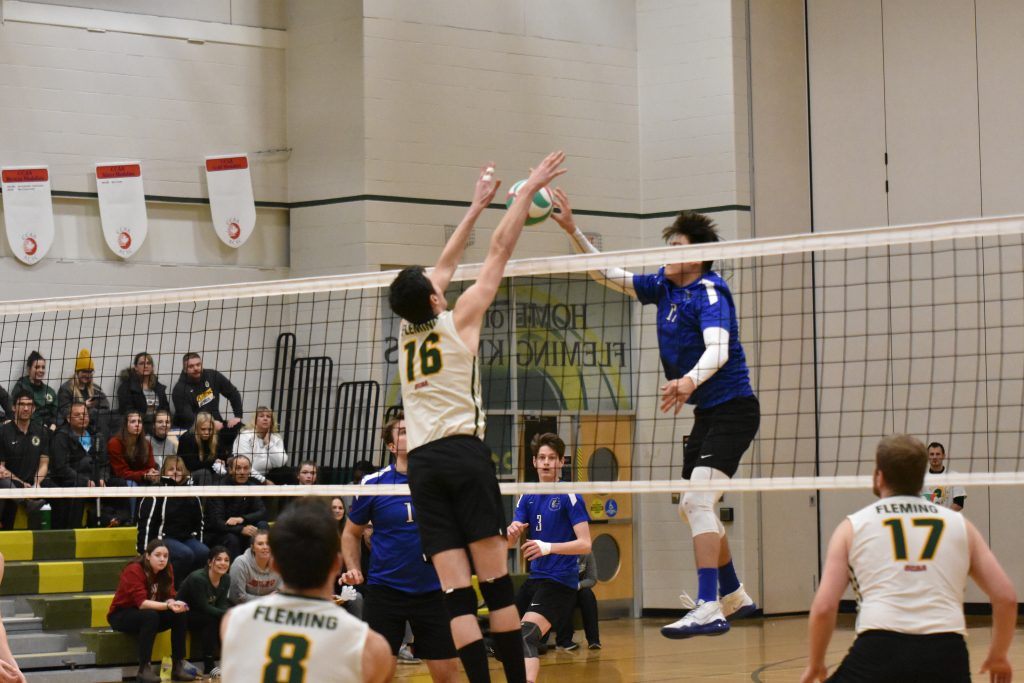 Peterborough, ON February 21, 2020 – Joel Howes, a fifth-year Fleming Knight on the men’s volleyball team set the career record for Stuff Blocks at his final season game with a total of 270.

On February 15, while playing an away game against Centennial College, Howes was credited with the two stuff blocks he needed to break the former record of 268, which Howes tied while playing against Seneca College on February 12. This record only encompasses statistics recorded during season play and does not include playoff, crossover, or exhibition game statistics.

Throughout Howes’ OCAA career in volleyball, he has accumulated an impressive record for blocks during season play. In his rookie year, Joel had 37 stuff blocks while only playing in 14 matches. Since his rookie year, Howes earned 58 stuff blocks in his second year, 57 in his third year, 55 in his fourth year and now 63 in his fifth year.

“Beating the record felt astonishing, it filled me with a sense of accomplishment, knowing that I currently have the most blocks ever recorded in the OCAA,” says Joel Howes. 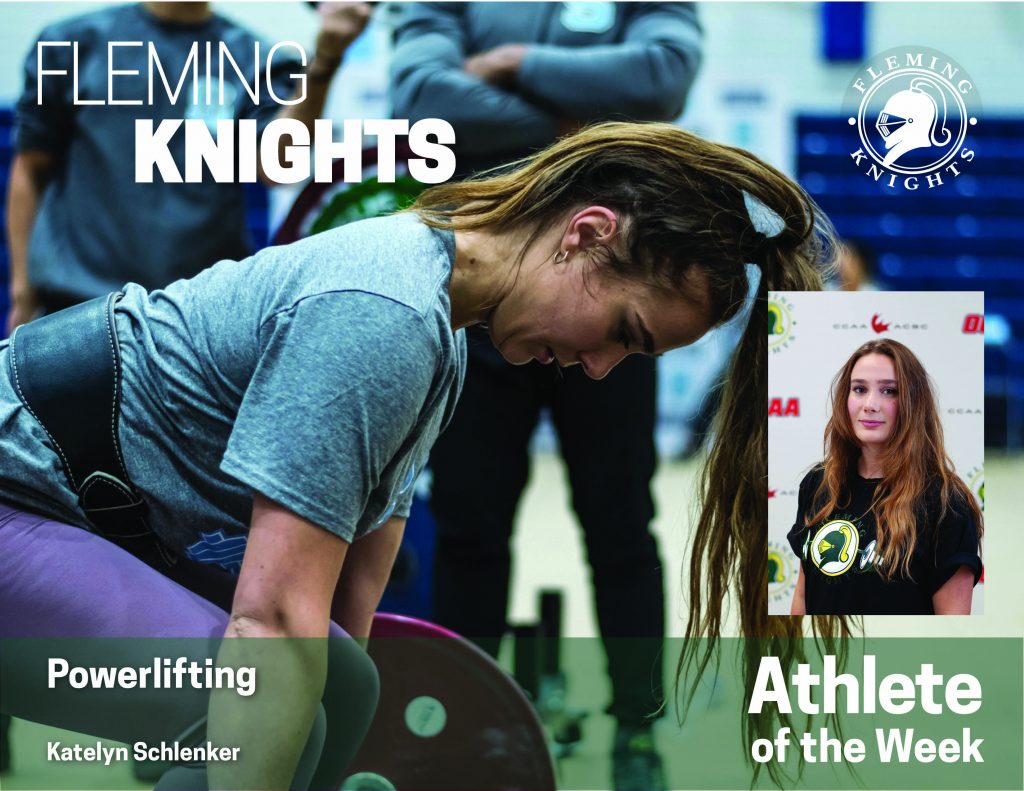 Fleming Athletics is pleased to announce your Athlete of the Week, in partnership with the Fleming Campus Store. Every week, Fleming Athletics will recognize an athlete based on criteria that could include game performance, team performance, academic recognition, campus and community engagement, and share with our Fleming community. This week’s Athlete of the Week is Katelyn Schlenker.

Athlete of the Week:  Katelyn Schlenker

Katelyn Schlenker is your Athlete of the week. She is on the powerlifting team and in the Fleming massage therapy program. On February 9 Katelyn gave it her all helping the Fleming Barbell team earn “Strongest School” for the fourth time in a row. At the Seneca Powerlifting meet, Katelyn bench pressed 120 lbs, deadlifted 275 lbs and hit 302 lbs on her squat. Besides helping her teammates earn Strongest School, Katelyn also earned individual awards for “Best Squat” and “2nd Best Overall Female Lifter”. Her Coach is very pleased with her hard work, and consistency, and loves that she always keeps great composure. She is Strong and Humble, and those are great traits to have in this sport! 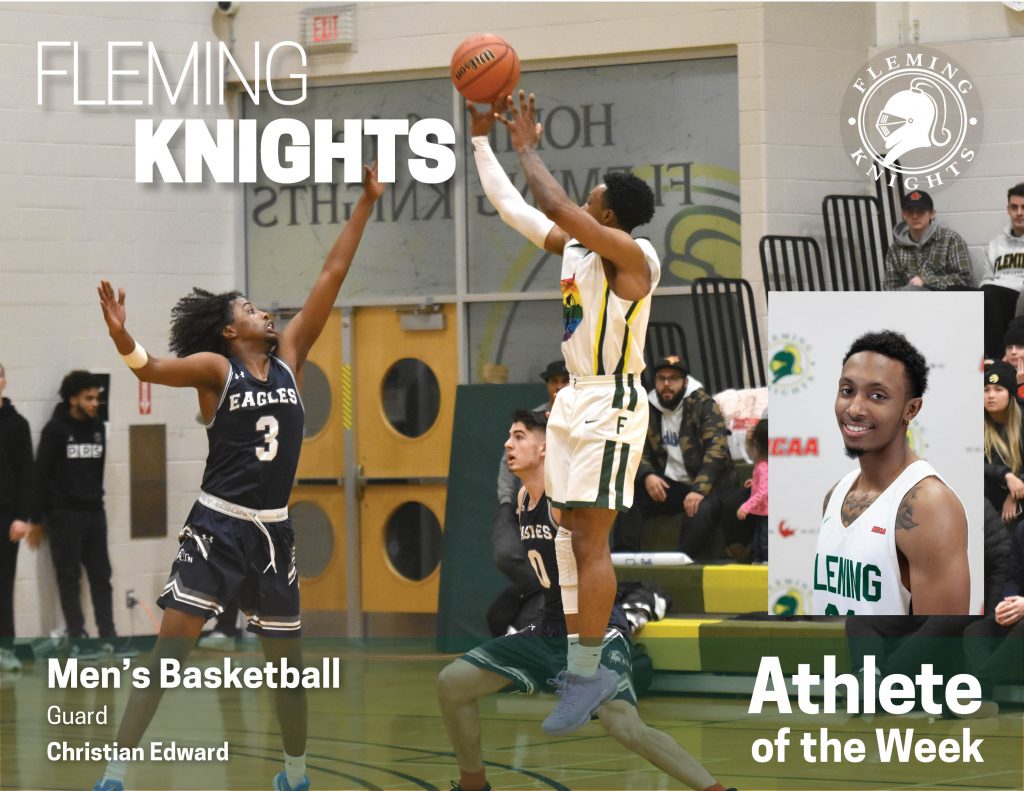 Fleming Athletics is pleased to announce your Athlete of the Week, in partnership with the Fleming Campus Store. Every week, Fleming Athletics will recognize an athlete based on criteria that could include game performance, team performance, academic recognition, campus and community engagement, and share with our Fleming community. This week’s Athlete of the Week is Christian Edward.

Athlete of the Week:  Christian Edward 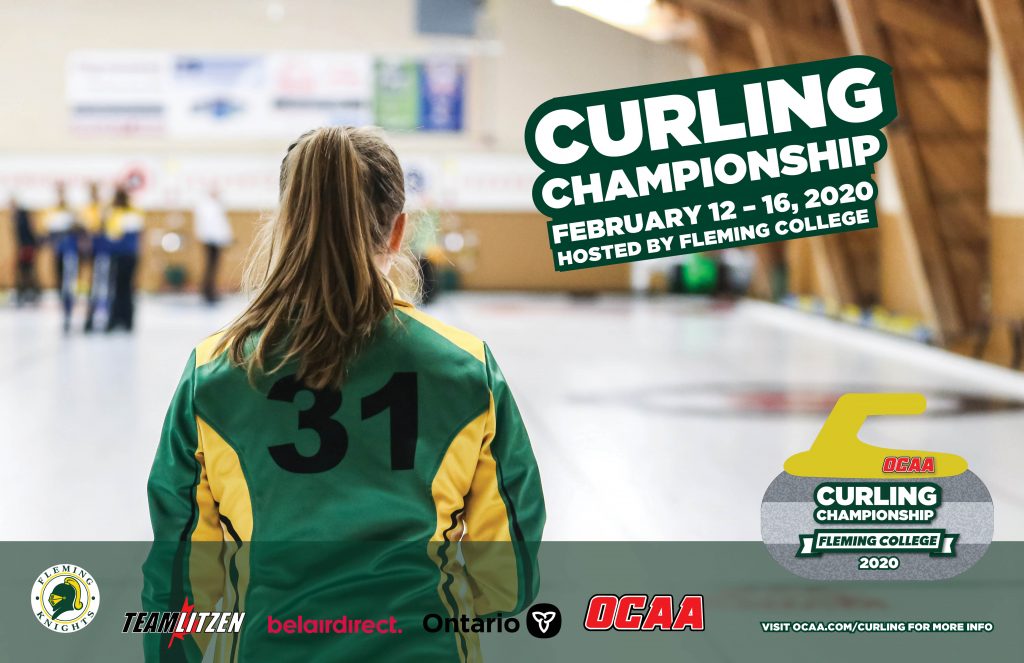 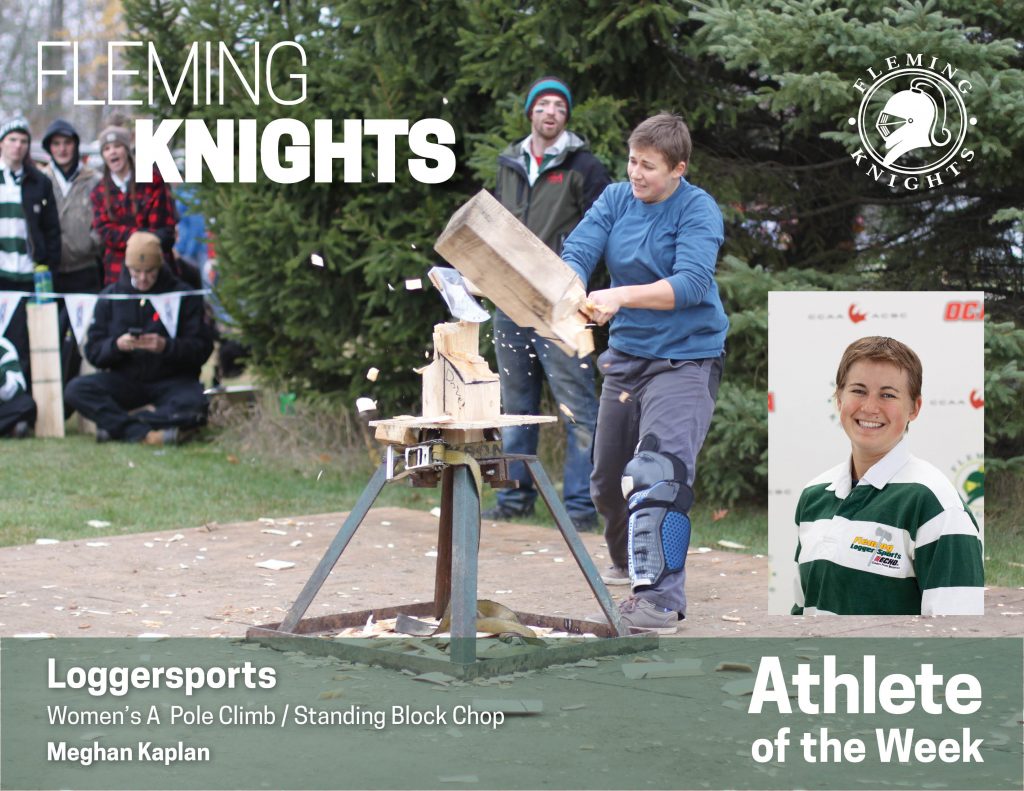 Fleming Athletics is pleased to announce your Athlete of the Week, in partnership with the Fleming Campus Store. Every week, Fleming Athletics will recognize an athlete based on criteria that could include game performance, team performance, academic recognition, campus and community engagement, and share with our Fleming community. This week’s Athlete of the Week is Meghan Kaplan.

Athlete of the Week:  Meghan Kaplan

Meghan Kaplan, a second year athlete on the Loggersports Women’s A team and team captain lead her team to a second place win overall this past Saturday at the McGill University Loggersports Competition. Meghan received first place in her individual event for Pole Climb event and second in her partnered event of Standing Block Chop. In doing so, Meghan set a course PR for her events. Megan is a great leader and a dedicated student. While serving as the Team Captain of the Loggersports Women’s A team she is also able to maintain a 4.0 GPA, all while working as a student tutor. 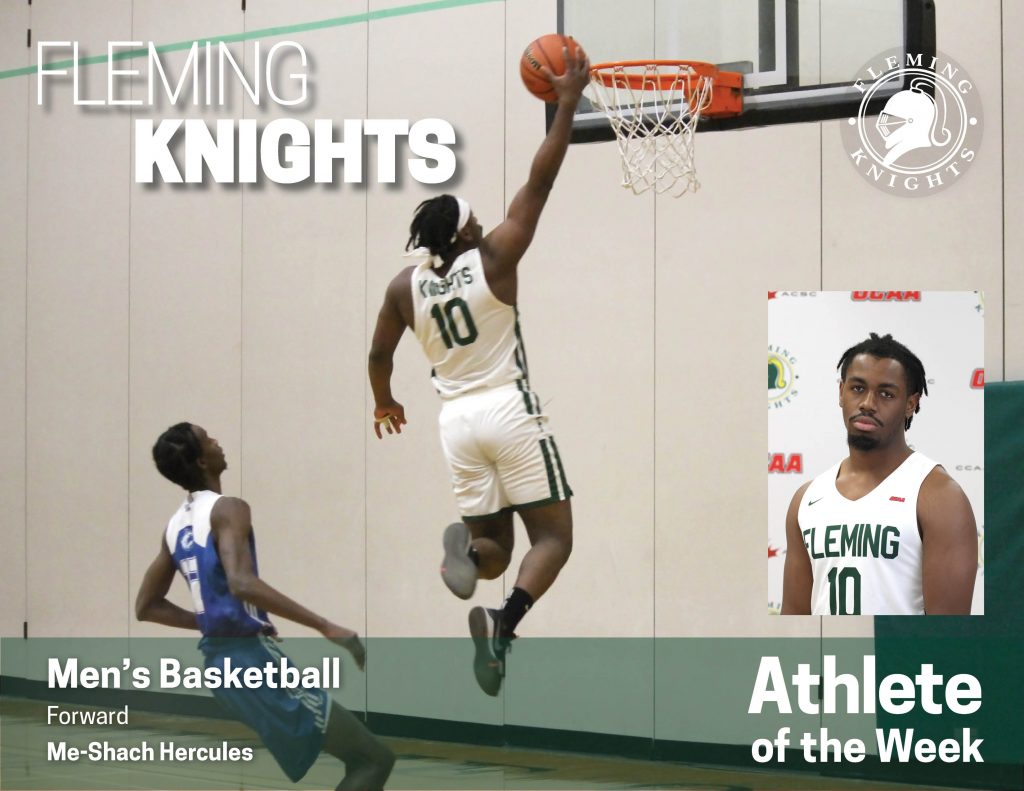 Fleming Athletics is pleased to announce your Athlete of the Week, in partnership with the Fleming Campus Store. Every week, Fleming Athletics will recognize an athlete based on criteria that could include game performance, team performance, academic recognition, campus and community engagement, and share with our Fleming community. This week’s Athlete of the Week is Me-Shach Hercules.

Athlete of the Week:  Me-Shach Hercules

Me-Shach, a first semester student, scored 11 points, had five rebounds, seven assists, four steals and only one turnover in his first start. All of this happened in only his second game as a Fleming Knight and against the top team in the province and top 9th team in Canada, the George Brown Huskies.