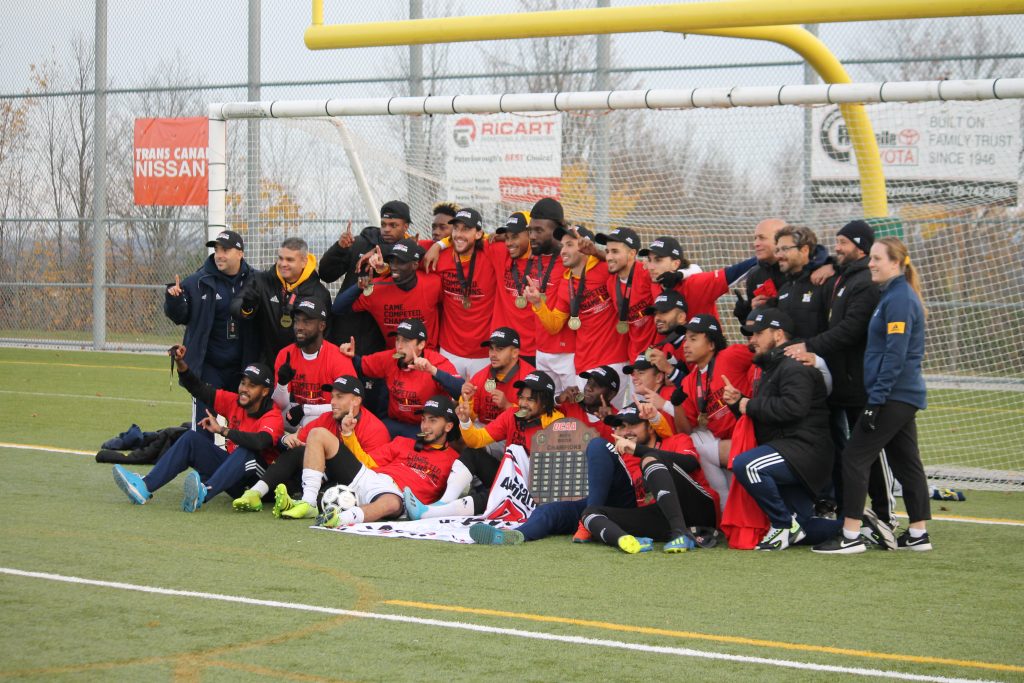 PETERBOROUGH, Ont. – The Humber Hawks won gold for the second year in a row at the OCAA Men’s Soccer Championship.

In the finals, the Hawks defeated the Fanshawe Falcons in the final match of the OCAA provincial championship at Fleming College in Peterborough, Ont.

The Falcons and the Hawks began their match in a fierce battle as two of the top teams in the championship should. Both teams appeared evenly matched as each team fought diligently to gain possession of the ball and to retain possession. The first half of the match was a heavily back and forth game with each team having few scoring attempts.

Within minutes of the second half, Leaford Allen of the Hawks scored the first goal of the match allowing Humber to establish a lead. The Hawks played a strong and more aggressive second half taking more shots on Fanshawe net than in the prior half. In the final 10 minutes of play the Hawks accelerated their lead after Max Ferreri and Alex Baez scored on the Falcons net.

This was the finishing blow to the Falcons as the Hawks were able to hold onto their 3-0 lead winning the match and the championship.   Goalkeeper Nick Frenati of the Hawks was named Player of the Game along with Bradley Heath, defender for the Falcons.

The Seneca Sting earned the OCAA bronze medal after defeating Sheridan Bruins 5-1 after falling to the Humber Hawks in the semifinals.

The Sting had a strong game over the Bruins in a fight for bronze at the OCAA men’s soccer provincial championship. Ariel Muhaza-Kabongo and Marcus McGlynn both scored two goals for the Sting.   The Bruins, although a formidable opponent, did not appear as strong as they were in the semifinals.

With Daniel Pereira scoring off a penalty kick, the Bruins showed that they were still in the match until the end. Despite scoring this goal, the Bruins fell to the Sting, but not before Isaiah Greaves would score another goal for the Sting, ending the match 5-1.

Player of the game was McGlynn of the Sting and Anthony Wright of the Bruins. Anthony Gurrieri of Seneca and Spencer Barber of Sheridan were named Championship All-Stars. 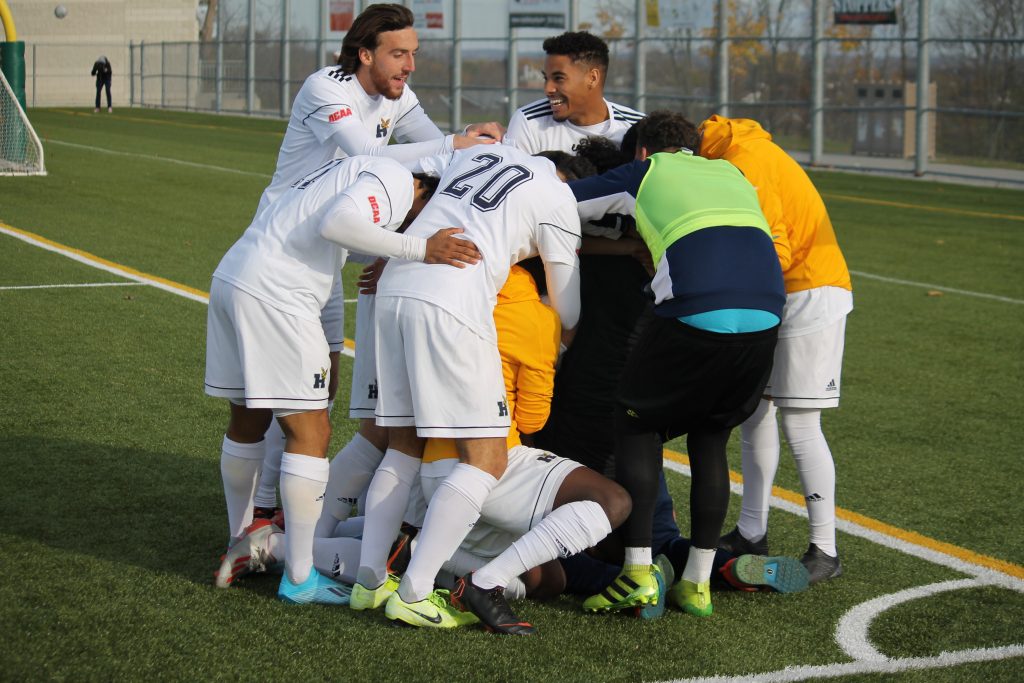 The semifinals raced to a start with the Humber Hawks facing the Seneca Sting.

Game 5 of the OCAA Men’s Soccer Championship brought a stiff competition with the Hawks and the Sting battling for possession. This stalemate was broken with Seneca scoring the first goal of the day. Scoring for the Sting was Cale Loughrey.

Humber quickly retaliated to Seneca’s lead exerting more pressure against the Sting. This allowed the Hawks to earn two goals and in doing so stealing the lead from the Sting. Leaford Allen tied up the match for the Hawks and Max Ferrari scoring the goal that put Humber in the lead. From this, the Hawks held strong to their advantage against the Sting and were able to win the match.

The player of the games in the match were Ferrari for Humber and Anthony Gurrueri for Seneca. The Hawks will move on to face off against the Fanshawe Falcons in Saturday’s gold medal match.

The Falcons were victorious over the Sheridan Bruins after a gritty match. The Bruins appeared to be the stronger team in the first half, holding onto possession of the ball and making some key goal attempts on the Falcons.

The turning point came for the Falcons in the second half following a stalemate for the entirety of the first half. Jonathan Kam and Malachi Morris were able to gain traction and able to breach the Bruins defence scoring for the Flacons.

The Falcons built on this momentum holding onto the lead in a match and securing their spot in the gold medal match on Saturday against the Humber Hawks.

The player of the games in the match were Jevontae Layne for Sheridan and Tomas Alvares for Fanshawe.   The bronze medal match will feature the Seneca Sting and the Sheridan Bruins, which is set to gets underway at 12 p.m. The gold medal match kicks off at 3 p.m. featuring the Hawks and the Falcons. 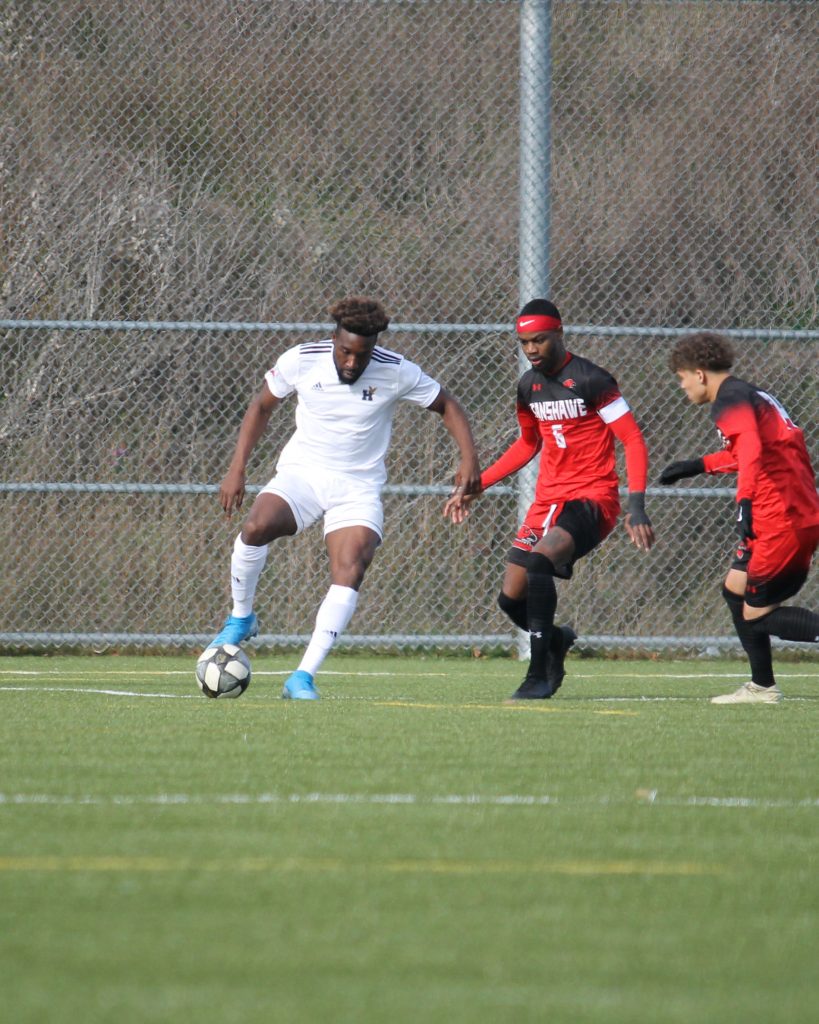 Humber College’s Leaford Allen (Brampton, Ont.) is the Ontario Colleges Athletic Association (OCAA) Men’s Soccer Player of the Year. He received the award in a ceremony held in Peterborough, Ont., on Thursday afternoon.

The East Division Player of the Year is Justin Gibson (Ottawa, Ont.) of Algonquin. The fifth-year defender was a stalwart on a team that gave up a league-low four goals against in eight matches. He also contributed a pair of goals on offence. Gibson is also an East Division First-Team All-Star and CCAA All-Canadian.

The East Division Rookie of the Year is Joshua Lee (Ajax, Ont.) of Durham. The striker led his team in scoring with eight goals in eight matches. Lee is also an East Division First-Team All-Star.

Chris Eveleigh of Toronto Mississauga and Rob Pereira of Fanshawe are the co-West Division Coaches of the Year. Eveleigh saw his Eagles improve on its 2-6-2 record in 2018 going 7-2-0 in a competitive West Division. Pereira led his Falcons to the West Division championship with an 8-1-0 record.

The East Division Defensive Player of the Year is Colin Reilly (Whitby, Ont.) of Durham. The fifth-year defender was a key part of keeping Durham opponents to a respectable seven goals against in eight matches. Reilly is also an East Division Second-Team All-Star.

The West Division Defensive Player of the Year is Bradley Heath (Markham, Ont.) of Fanshawe. The fourth-year defender played a strong role as Fanshawe only gave up nine goals in the seven matches he participated in, including three clean sheets. Heath is also a West Division First-Team All-Star.

Algonquin and Humber were both honoured as the Best Defensive Teams in the East and West Divisions, respectively. Algonquin allowed just four goals against in eight matches while Humber gave up only seven in nine matches.

The Ontario Colleges Athletic Association (OCAA) is the recognized leader in intercollegiate athletics in the province, dedicated to student-athlete and sport development. The OCAA has 27 members sponsoring 12 varsity sports.