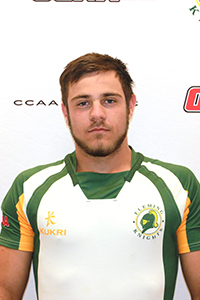 First-year player Alex Sicker (Norwood) scored a pair of tries in Fleming’s 69-12 win over Loyalist on Oct. 22. Sicker ended the six-game regular season with seven tries and one convert totaling 37 points. Fleming finished tied with St. Lawrence-Kingston atop the East Division standings at 5-1, but won the tiebreaker, giving the Knights a division championship and a bye into the OCAA semi-finals.